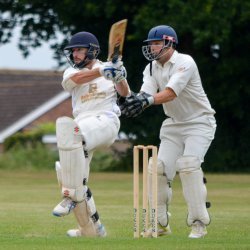 Hythe & Dibden's Indoor team dropped to 3rd after their first league defeat of the season by 6 runs to Locks Heath B.

Locks set a above par score of 149 after their top 3 batsman all retired 25+. George Sanderson (playing his first game of the season and not renowned for his fielding skills outside) then claimed two runs outs and Matt Howe 1. The pick of the Hythe bowling ~ Lenny 0-24 off 3 .

Hythe started well in reply with both Sanderson and Howe retiring 25+ . Skipper Dan Taylor chipped in with 16 and TJ 14 but Lenny was out having a oick and being stumped for a duck. Kev Mc made 2 before the openers returned but sadly fell 6 runs short.