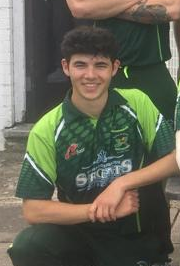 Hythe chased down 149 to beat Southampton Travellers by 4 wkts to go 2nd in Div 2 of the Indoor League last night.

Travs batted first and despite losing Abraham tTJ 3-28 the pick of the bowling. an excellent caught & bowled by Tom Jones for 3, Choudary & Hardwicke took the score to 62-1 before both retired. A Brown onslaught saw him retire 26* and after 9 overs Travs had progressed to 102-1.

Then a double wicket spree from Tom Jones saw him bowl Salaskhar for 14 then Ifran was brilliantly caught by Dan Taylor for a duck.

Hardwicke returned to be run out by Duell on the last ball ~ Travs 148-4 at the close. For Hythe

Hythe opened with Matt Howe & Jonjo Stovell the pair adding 47 in 4 before Jon got himself out for 17. Howe retired 25* inc 2x4s and a six and at half way Hythe were 79-1. Lenny and Dan Taylor batted cautiously for a couple of overs before Lenny opened up with 3x6s to retire 27*. Taylor 30* was there at the end (ex4s and a six) supported by Kev McCarthy whose 3 balls all went for 3s. Hythe won with 9 balls to spare and go 2nd.