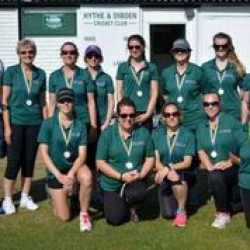 An excellent first evening of the GW Tournament saw favourites Lymington storm to two straight wins whilst the H&D Ladies won one and lost one. Calmore Sports the team that lost both games

Hythe's batting was strong in the first game scoring 273-1 off their 8 overs. Debs & Becky & Judy & Wai both putting on 23 partnerships.

Dawn took a wicket in the first over then 3 run outs and a Pam wicket reduced Calmore to 215-5.

Lymington comfortably beat Calmore in the second game by 47 runs.

Then the final game of the evening saw Lymington beat H&D by 22 runs.

Hythe did well to reduce Lymington to 254-3 ~ Kate recorded a maiden, Pam got her second wicket of the night whilst the catch of the night saw Judy take a one hander that the men would have been proud of.

Hythe's batting struggled against the accuracy of the Lymington bowling until the final pairing of Wai & Judy added 19 which earned Hythe a bonus point. Wai hit Hythe's only six of the evening.

No fixtures this week but Nov 10th sees Paultons, Sway and Wellow make their entrance into the league

Highest Innings In a Match