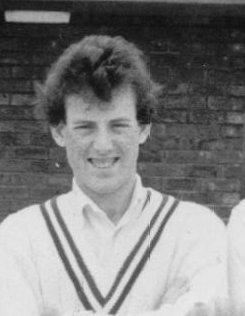 One Of Hythe's Finest All Rounders

Without question one of Hythe & Dibden’s finest finest ever players, Wayne started playing Second XI cricket in 1977, and was an instant hit - taking 32 wickets for the Second string in only his second season.

By 1980 he was a First team regular forming a prolific partnership with Terry Rawlins, taking 180 league wickets as Hythe enjoyed a successful stint in the Southern League.

During the 1980 season he also took a hat trick in a friendly against Trojans and was part of the Hythe team that were beaten in the Sydney Wyatt Cup Final vs Calmore. Wayne also topped the leading wicket taker for Hythe that season taking 28 wickets @ 15.64. This included 8-27 vs Old Tauntonians.

The 1982 season again saw him top the bowling averages @ 15.14 and in 1983 he achieved a league hat trick against Southampton University.

Wayne was nominated the Southern League Young Player of the season just reward after collecting 81 wickets for Hythe in all competitions at an average of 11.32.

Like a number of the Hythe bowlers, Wayne practised hard at his batting and used Sunday cricket to gain valuable experience before taking up golf and giving up the Sunday game altogether, by 1986 Wayne had decided he needed a break from cricket and left to pursue other interests.

Wayne rejoined Hythe at the tail end of 1989, and after a slow start, would again establish himself as a one of the clubs best players with both bat and ball. Hythe had in the mean time gone through some big changes and were now a Hampshire County League club, and were desperate for top player like Wayne to push the club forward again. Wayne over the next 7 seasons would take more than 120 First team wickets, and score 1800+ runs.

In 1995 Wayne dropped down to Second XI to Captain them and took 9-19 vs East Tytherley. He later return to the First Team in 1996 to take over the Captaincy with immediate success. He also thumped an unbeaten 150 against a hapless Swan Green side when playing for the Seconds, but a poor season in charge of the First’s in 1998 would result in shock relegation, despite Wayne’s best efforts with the bat.

After the 1998 season Wayne decided to move club and had a couple of seasons with O.T.’s & Romsey, but in 2001 following a chat with Hythe’s First Team Captain Paul Whitlock, who promised Wayne he would be joining a revitalised club keen on success, Wayne came back home and when Hythe won all 13 league games Wayne picked up a well deserved HCL title medal. In 2002 he had his finest season with the bat scoring over 500 league runs with a top score of 124* against Waterlooville, he bowled well too taking 15 wickets, and helped Hythe to another promotion. The New Forest Indoor Cup was also captured and Wayne was an important member of the side with both bat and ball.

In 2003 Wayne struggling with fitness decided it was time to hang up his boots, finishing with 166 First XI HCL wickets and 2517 runs.

2006 and he is back again, for the fourth time, playing in the Second XI and doing what he does best scoring runs and taking wickets. Wayne scored 327 runs at 54.50 and 19 wickets with a best of 6-30 vs New Milton.

Having enjoyed the season Wayne was back in 2007 to help the side gain promotion and win the New Forest Cup for the first time. An injury during the season restricted him to 10 games but he still managed to average 40.33 with the bat and take 12 wickets. 2008 - Wayne continued his form - topping the 2nd XI Batting Averages @ 36.77 scoring 478 runs in the process and 25 wickets @ 18.24. 251 more runs came in 2009 at 25.10 which was accompanied by 17 wickets @ 15.06 - (15th in the Divisions Averages) still making him still a massive asset for the club and a fine role model for the many colts coming through.

Availability & injury reduced Wayne to just 13 games over the next two seasons but in 2015 he opened up the season with 124* in a friendly at Curdridge. That season he scored 237 runs in 8 innings for the 3s.

They say you never lose it - and over 30 years Wayne hasn't. He is a great role model for the youngsters and all the time he can remain fit is a great asset to the club