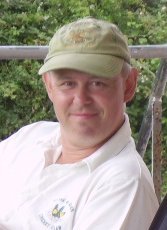 Played For Hythe Since 1988

- 6 Friendly Tons with a Highest Score 111* vs Priory Panthers

Sean joined the club in 1988 after deciding he needed to play a summer sport having played football locally for many years.

The first few years were hard graft with the bat with more scores below ten than above, selection was more for his medium pace bowling and excellent fielding. Phil Pick however could see potential and soon had him bowling in the Saturday Second XI where he took 2-40 on league debut against Lymington.

In The Guru’s second season (1989) he made the First XI after some impressive performances for the Sunday First XI where he scored 75 v Trojans and took 4-29 v Bashley and 3-1 against Tichbourne Park.

Improvement in Sean’s batting came in the mid 90’s when after two serious knee injuries the surgeon said ‘yes you can bowl again just don’t expect to walk again’. Sean as everybody knows doesn’t give up and little did we know then that this guy would go onto be Hythe & Dibden's highest ever run scorer - scoring 97 fifties & 10 centuries in his 14,243 runs for the club.

During the early ninties the First XI slipped down the divisions but Sean still managed to score 450 runs in 1990 in all matches. In 1991 in County 3 he took 3-9 v Winchester and a 50 v Chichester in a friendly. Between 1992 – 94 The Guru had quiet seasons probably effected by the responsibility of captaining the Sunday XI and in 1995 dropped down to play for the Seconds scoring 87* v Ellingham and another 50 v Cadnam. This season also saw him score his maiden ton 108* v Nursling & Rownhams for the Sunday Second XI.

The 1996 season saw him captaining the Second XI regularly making good scores that had Phil Pick persuading him to play First XI cricket again. His introduction had an instant impact scoring a match winning 62* v Crondall and 78 v Old Poole Grammarians. 1997 saw Sean score 202 runs for the First XI @ 20.20 and was now seen as a regular First XI player.

Guru had now equalled Dave Price record of 10 centuries for the club and still going strong. The 2011 season didn't start well for the Guru as he struggled with injury and members were questioning if he still had it in him. Yet by the end of the season he had scored 379 league runs @ 37.9 & 400 friendly runs @ 36.4.

A great clubman Sean has worked on the cricket square at Hythe for several years. His love for the game - no one in the club has played more matches in the Green Caps over the past 12 years. He is also a qualified coach is always willing to help the colts.