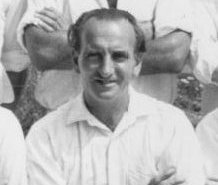 Captained a Hythe Side For 31 Years

- Chairman of the Club for 20 Years

'His Passion & Committment For Hythe & Dibden Cricket Club Over Fifty Years Was Special & Still Today It's Rare To Play a Match Without Someone From The Opposition Asking About Phil Pick' Phil Pick was born in Nottinghamshire where his nephew Andy Pick, had a successful career playing for the County as a pace bowler.In 1950 Phil was working as a civilian employee in charge of the Officers mess at RAF Calshot. He was persuaded to join Hythe & Dibden and the following year he took on the Sunday First XI Captaincy.In those days Phil and Harry May formed a potent opening attack for Hythe with Harry being a very accurate pace bowler and Phil more round armed but still certainly sharp as well as being known for his attacking batting. Indeed Phil's only ever Hythe Century came in 1956 when he scored 107 vs Eastgate.Phils record as a captain was quite remarkable and during the sixties he only missed one game in ten years of Saturday and Sunday Cricket. He was also willing to help out and play for other clubs and it is said that one summer he managed to play all seven days of the week for various clubs such was his love for the game.His son Mike enjoyed telling me of the time when the Nottingham 'Picks' decided to arrange a cricket match with their side made up of eleven Picks. With nine already confirmed they asked Phil and Mike to travel up to make the eleven which would have been a great achievement. But with Phil being Phil he decided they couldn't play because they both had to play for his beloved Hythe.As a Captain Phil wanted to win every game but fairly and within the rules. Older players will remember his opening words to the selection committee every Monday, " We must have a good side".

If a catch went into the air most captains shout out "Call" but not Phil, he was remembered for saying " One of you". His field placings were often somewhat imprecise but if a ball speed past you in the outfield 20 yards from where you were, you can be sure Phil would shout out " Thats where I put you".

Some Captains will bring in any sort of player just to make up the numbers but not Phil. On one weekend Hythe were playing Calmore at home with just seven players. Hythe bowled them out for just over a 100 shortly before 4.30pm and had to bat for 20 minutes before tea. Hythe had two batsman at the crease, two padded up and two umpiring, with Phil making the teas in the old tea hut. The batsman survived though and after tea Hythe went onto win by 7 Wickets.

By the seventies Phil was captaining both the Saturday and Sunday First XI sides and in 1972 he lead the club to winning the Alderman Stone Cup against New Milton where he and son Mike took 5 wickets between them. In the same year he also lead the side to the semi finals of the Echo Trophy.

Phil was proud as punch to have Mike playing in the same side as him and for many seasons they would open the attack together.

In 1973 Hythe joined the Hampshire League and were placed in County Division 1 and Phil lead Hythe again to the Alderman Stone Cup Final but this time they were beaten.

Phil decided in 1974 to step down as First XI skipper in League and Cup matches but continued to captain the Sunday XI. He continued to act as vice captain to Brian Sexton and during that first season in 1975 bowled more overs than anyone else in the league.

In 1976 Hythe had their finest season to date as they finished as Hampshire County 1 Champions and also beat Lymington in the Sydney Wyatt Cup Final. It was fitting that Phil was instrumental in Hythe's success taking 5 wkts against Hook and Hyde Ramblers and 6-15 against Lymington in the league.

Phil continued to work tirelessley for the club both on and off the field and was now Chairman as well still playing. By 1978 Hythe had a new clubhouse and had joined the Southern League. Phil took on the captaincy of the Second XI

No one was more prouder than Phil when the First XI finished 2nd to Lymington in the Southern League in 1983 and 5th in 1984. But by the end of the 88 season and with several key players now moving on the Southern League Clubs were voting against Hythe staying in the league becuase of their strength and poor performances. Phil fought tooth and nail to keep Hythe in the Southern League despite knowing deep down that the club he loved didn't have the playing power to compete with the other sides.

Phil retired from playing in 1987 after scoring over 4,000 runs for the club and taking over 900 wickets. His work as Chairman continued and over the next ten years when the club went through its most difficult times, without the efforts of Phil and Tony Woodhouse the club could have easily folded. Phil persuaded influencial players like Paul Whitlock and Wayne Effeny to return to the club and the First XI which was sliding down the leagues at a rapid pace had to be rebuilt.

Following a car accident in 2000, Phil stepped down as Chairman after giving 50 years service to our club. Sadly Phil's health was never the same after that accident and his trips down to the club became less frequent . But when the First XI won the County 4 Title in 2001 the first message of congratulations came from Phil - pleased to know that 'HIS CLUB' was on the rise up the Hampshire Pyramid once again.

His Passion for Hythe & Dibden Cricket Club will never be forgotten