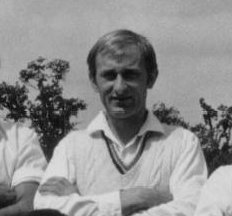 Swanny's loyalty to H&D over 30 years was exemplary

Mike joined Hythe in the late fifties from Exbury. His father Bert also played cricket for Hythe after joining them from Husbands.

By the early sixties Mike was playing first team cricket enjoying success as a middle order batsman and off break bowler. In fact in the 1962 season he took an impressive 75 wickets @ 11.37.

In 1964 Mike was in the Hythe side that lost the Sydney Wyatt Final be 1 run to Minstead. Mike scored 20 in the run chase and also went onto take 31 wickets that season.

When League cricket was introduced Mike filtered between the firsts and seconds. During the County 1 Championship winning season of 1976 he took 14 wickets for the First XI and also played in the Sydney Cup Final where Hythe beat Lymington by 8 wickets to secure the double. But Mike also played a few Second XI matches including a tremendous all round performance vs Winterslow where he scored 71* and took 7-40.

Mike Captained the Second XI in the Southern League between 1985 & 1988 and did a fantastic job for the club as the Second XI continually found the going tough in the top flight following a mass exodus of players. 1988 he scored 239 runs inc 41 vs Old Tauntonians. 1989 his final season he scored 218 runs @ 15.5 including 47 vs Hungerford.

Swanny's Hythe career span thirty years though he did have a couple of small periods away from the game. Talk to the other hall of famers - they will tell you what a tremendous job he did in the late eighties when everyone else left the club - 4,000 runs including a highest score of 102* and 600 wickets

Mike Swanton - deserves to be called a Hythe Legend.