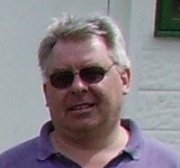 - 4 League Fifties with Best 64* vs Sulhamstead

As a player Kenners scored nearly 3,150 runs in all games for the club with a highest score as far as the records tell me of 94* vs Bashley Ramblers & 90* against I.T.W Basingstoke. Many of his innings on Sundays deserved three figures but playing under Northy and always batting second - there was never enough time.

During the 1999 season as well as the 90* he went onto score 378 runs on a Sunday at an average of 37.80 with other fifties against Sarisbury Athletic (54) and Robins (56). The following season he hit a match winning 75 against Bashley Ramblers.

He served a number of years in the late ninties as vice captain to Tony North in a side that went two years unbeaten.

During the ninties he earned the nickname 'Rhino' from his team mates for the way he darted around the outfield for such a big framed chap. But his committment in the field was first class and one for all the colts to learn from.

I can recall Kenners pulling off a string of running catches on the boundary but one I will always remember was against Farnborough down at Hythe at the bottom end close to the drain cover. Everyone knows how hard it is to field down there but if he had missed it it would have gone for 6. At the time Farnborough were around 94-2 chasing 152 to win and well in control but after that catch the whole Hythe side raised their game in the field and won by 9 runs.

Ian spent a few years in the playing in the first team before a back injury forced him into retirement. The 1999 season saw him score 208 runs @ an average of 17. His highest score - a match winning 64* vs Sulhamstead - a 50 against Steep followed. Next season 2000 he scored 172 runs with an average of 21. His Highest score that season - 58 vs Portsmouth. The 2001 season saw Kenners dropping down to play for Second XI Ian averaged 24.17 for the season a good effort in a struggling side.

He then went onto umpire for the First XI and then in 2004 Ian took over as Chairman after Tony Woodhouse had suffered an illness.During his time in charge he was a big voice for the cricket section in our conquests with the council and also the football section. He also was a major factor in the cricket section getting their equal share of the fete funds despite our section failing to support it as much as the football and the junior section.

The clubs in good health at the moment with a lot of youngsters coming through and the enthusiasm in the club as good as I have ever known . We need to keep it going forward and maintain the hard work Ians put in between during his time as Chairman.

Ian returned to the club in 2015 to umpire for the First XI.