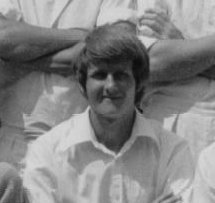 Finest Wicket Keeper To Have Played For Hythe

- Captained the First XI in the Southern League - 1979

Probably the finest wicket keeper to ever have played for Hythe - Without doubt the most serious cricketer to have played for the club and he helped take Hythe to another level during the early years of league cricket and was instrumental in Hythe's biggest successes - winning the Hampshire County 1 Title in 1976.

Hedley also played a part as Hythe finished Runners Up in the Southern League of 1983, and was in the side that won the Stone Cup in 1972 and Sydeny Wyatt cup in 1976.

With the strength of batsman in the first team Hedley's time in the middle was limited, yet when he was called upon he was a decent batsman scoring over 4,500 runs for the club with a highest score of 82*.

In 1978 Hedley scored 396 runs in the league season including a match winning 61 vs Portsmouth & Southsea. In 1980 he again played in the Hythe side that lost in the final of the Sydney Wyatt Cup to Calmore Sports. But probably Hedley's finest innings for Hythe was in 1980 in the Southern League when he scored 80 vs Havant. Hedley went onto average 26 with the bat that season.

He was also a very good clubman and boy did his mother make great scones.