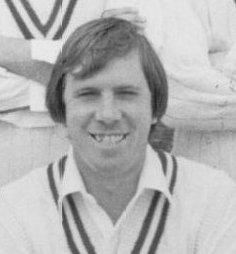 - Took Hythe To Runners Up in Southern League

Without doubt Hythe's most successful skipper, George was also a key top order batsman well known for his big hitting.

Right from the time George joined the club in 1972 he was an influencial in Hythe winning matches. Knights then captained the side from 1980 through to 1987 during their successful days in the Southern League. He also started assisting on the square in 1975 then took it over between 1980-87.

George probably had one of his best seasons, personally, in 1977 scoring 427 league runs including 96 vs Calmore Sports his highest ever league score.

In 1980 George led the side to runners up in the Sydney Wyatt Cup Final but returned again the following year to win the trophy. Knights also took his side to the semi finals of the Echo Trophy in 80 &81. Unfortunately they couldn't repeat their Sydney Wyatt success in 1982 as they lost in the final.

The highlight of Knights time at Hythe without doubt in 1983 when they finished second to Lymington ( Hythe's highest ever league position ). Whilst Price and Hussain were influencial with the bat and Terry Rawlins with the ball, no one was more instrumental than the skipper.

In 1984 they finished 5th but at the end of the season Knights knew he was about to lose both Price and Hussain and expressed his concerns to the committee that Hythe needed to find some new players. Knights continued for three more seasons despite several of his successful side, having left the club. After the 1987 season George felt with a lot of players now left the club - the social side of the club had gone down. What with that and spending too much time down at the club preparing wickets and playing, Knights decided to move closer to home and join Old Tauntonians.

Surprisingly George never scored a league ton for Hythe - his highest knock in the Southern League was 86 not out against Alton. He did however score his only Club Century in a friendly against Farnborough in 1985 when his 104 included 13 fours and 2 sixes.

George averaged 25 with the bat during the sides seasons in the Southern League and consistently scored over 600 runs per season ( inc club matches).

Still today George remembers his time with Hythe with a smile on his face particlarly those special seasons in 1983 & 84 when Hythe finished and and 5th. He describes Paul Whitlock at that time as the best number 11 in the league. That proves how strong the batting line up was.