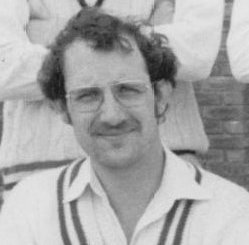 - 3 Friendly Tons with a Highest Score 151 vs Krakatoa

David Price only played for Hythe for five seasons but without question he was the finest opening batsman to have played for the club - and that was the opinion of many of the legends in the Hall of Fame.

Dave joned the club in 1980 from Deanery where he use to bat 7 or 8 and very occasionally bowled. George Knights new of his talents and quickly turned him into an opening batsman who never gave his wicket away and if he was still there after 20 overs then guaranteed a century was on the cards.

Price then followed that up in 1983 with 674 runs as Hythe finished second in the Southern League after losing three of their first four matches. Price scored another league ton this time against Old Tauntonians where with Mel Hussain they formed a prolific partnership and put on 230 against Old Tauntonians for the third wicket.

Sadly after the 1984 season Price had to move away with work committments ending up in Belguim. Such was his craving for cricket he use to travel 100 miles each weekend from Brussels to the Hague to play the game. He later moved out to Saudi Arabia. Unfortunately Hythe could never replace a guy of his ability.

George Knights described Dave Price as not only a fine batsman but also a steady seam bowler, good clubman and the best slip fielder he ever played with.

David Price - The Finest Bat To Play For The Green Caps