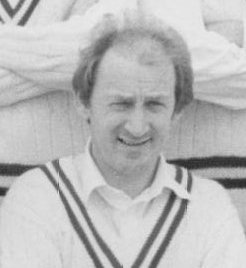 The perfect gentleman and a true sportsman in every sense!

Brian was a top figure in the success of our club back in the 70's before he moved out of the area and settled down to live in Wimbourne, Dorset.

Brian a londener, joined Hythe & Dibden Cricket Club in 1969. He soon became a first team regular demonstrating his all rounder tag in every sense of the word. During the 1970 season he took 67 wickets for the firsts and during the 1971 campaign Brian recorded 6-5 v Andover Banks and 8-28 v Trojans

As a batsman he was generally a slow starter but when he got going the runs flowed. One weekend in 1977 Brian scored two centuries in successive days a performance that club stalwart Phil Pick described as the biggest achievement he had seen during his thirty years playing for the club.

As a swing bowler if the conditions were right he knew how to exploit the opposing batsman, and as a cover point fielder he moved with the speed of a county player.

Brian along with George Knights were the biggest influences in Hythe winning their first trophy in 1972 when they won the Alderman Stone Cup. In the same year they the got to the semi finals of the Echo Trophy.

In 1974 Hythe got to two more semi finals and Brian recorded a ton for the club scoring 108 v Castle as well as taking 75 wickets.

In 1975 when Phil Pick stepped a side, Brian took over the captaincy. He guided Hythe to third place in Hampshire County 1 and led by example scoring 505 runs and taking 41 wickets which included 7-20 v New Milton and topping the County 1 averages with a 8.78 average.

Brian along with George Knights and Terry Rawlins were instrumental in the clubs achievements over the decade.

In 1976 Brian led Hythe to their finest trophy as they finished as Hampshire County 1 Champions and also won the Sydney Wyatt Cup in the same year. Brian topped the County 1 Batting averages at 46.27.

He followed that up by taking Hythe to the Sydney Wyatt Cup Final in 1977 though they lost the game and also scored an excellent league hundred 101 v Paultons. As the committee received the news that Hythe would be in the Southern League from 1978 Brian stepped down to hand over the reigns to Brian Buck.

As Hythe stepped up into the big league Brian still put in some strong performances including 30 wickets in theSouthern League in 1978 and 79* v Bournemouth. He also scored 77* v Petersfield in 1981 and 5-27 v Waterlooville.

Brian continued to play for a few more seasons before an illness limited his availability but what an asset the man had been to our club over ten years topping both the Hampshire League batting and bowling averages for the green caps.

He regularly represented the New Forest Cricket Association and the Southern League in representative matches.