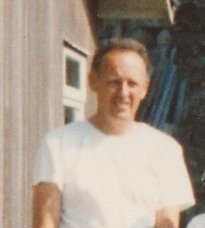 - Captained the 2nd XI & Sunday Side

Alan joined Hythe in 1958 and spent over 20 years as groundsman providing excellent strips through endless hours of committment. He opened the batting for many seasons for the Firsts and between 1967 & 1980 played 401 games for the club.

He later went onto captain the Second XI through the seventies and early eighties and in the 1976 season he amassed a 593 runs for the club including several half centuries yet Alan never managed to get into three figures. He then set up a Third XI to filter colts in adult cricket. During the seventies Alan's Sunday side consisted of himself, Tony Woodhouse and nine colts which was criticised by many throughout the club. Yet he continued to play the colts and filter them through into adult cricket to which the club benefited in the end.

In 1975 Alan set up the first Hythe & Dibden colts side and through the next 18 years he put his time and effort into developing the local youngsters. It was just reward when in 1989 his Under 14 side won the New Forest Cup and then continued the success in the following year.

A great servant to the club - in the early ninties Alan moved out of the village and his long 31 year association with Hythe was over. He was certainly missed by the club however over the past few years we have seen Hythe revisit Jones Lane. Still today he recalls his years with Hythe as if it was yesterday.

You will often here Ben Kendrick say that it was playing for Alan's third team at such a young age that made him such a decent cricketer -and there's many more who would agree with him.