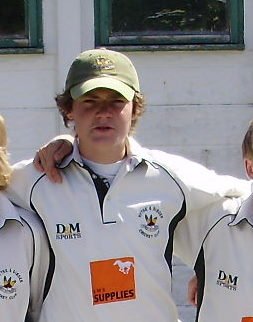 Could you name the most successful young players in Colts Cricket during the past 18 years.

Harry Smith (pic) and Elliott Carley both scored 3 fifties during their times as a colt however Harry remains the leading colt batsman by virtue of scoring more 40's.

Dan Duell has moved into the top 6 leading colts list after his 53* this year.

With batsman at Under 9s & 11s playing the 4 overs pairs cricket ~ it is not til Under 13 level that they can really start hitting scores of 30+.

In the Bowling - Harry's brother Ben Smith (6-13) held the best return from a bowler until 2011 - when Tom Ladbury took 6-9 in 4 overs vs Sway. That probably will never be beaten in my time .

Nine year old Harry Wakely has made it onto the bowling list after his 4-8 vs Pylewell Park which included a hat-trick & U11 Daniel Prentice also took 4-9 vs Pylewell Park.

In this list of Batting Stats ~ 16 of the lads have gone onto play for the Hythe & Dibden 1st XI ~ Something we are very proud of as a club.